Smokey Robinson at the Edgewater in Laughlin

For 50 years, Smokey Robinson has been a household name, a singer, songwriter, a legend from the 60’s to today. All these years later, he’s still got it, and he and his band brought it to Laughlin Nevada tonight! A sold out crowd filled the E-Center at the Edgewater Resort, and from the looks of it they had a great time! The show started at 8PM, but the job started days in advance when the AV Vegas team rolled into town to make ready. All the instruments were set, all the lights were programmed, and the sound system was checked. Being that we are the go to resource for all Edgewater concerts, AV Vegas provided everything for this event except the music! Will Leinninger and Richard O’Hollaren took charge of making sure every sweet note from Smokey’s voice carried all the way to the back of the packed auditorium. Donald Landrus and Jason Platz labored for 2 days to meet all the specific lighting requirements for this unique concert. Meanwhile, Wally Parris set the stage with all the keyboards, guitars, drums, and all the other musical instruments used by Smokey’s happening band.

For this show, four follow spots were requested by the artist. In order to accommodate, the guys took down the standard scaffolding usually on hand and replaced it with a custom truss structure covered with Stage Right stage decks. Once the truss was setup, the food & beverage team liked it so much that they setup a bar right underneath, softly lit with our LED lighting. It worked out so well, and looked so cool, we’re just gonna leave it there for the next show!

The E-Center is a great venue for concerts, it’s comfortable and has great acoustics. At tonights event everybody brought their good time shoes. Some were dancing on the sidelines, many were singing along, and all were rocking to the smooth music. We at AV Vegas are proud to be a part of it.

See you next show! 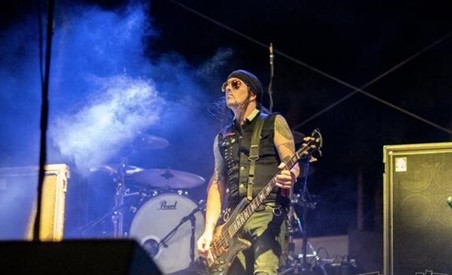